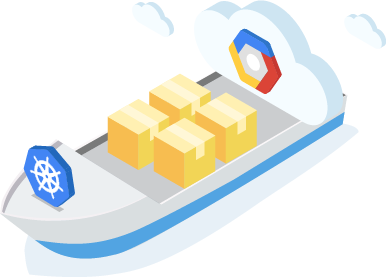 Cloud Build lets you build software quickly across all languages. Get complete control over defining custom workflows for building, testing, and deploying across multiple environments such as VMs, serverless, Kubernetes, or Firebase.

CI/CD in a Serverless World

Commit to deploy in minutes

Going from PR to build, test, and deploy can’t be simpler. Set up triggers to automatically build, test, or deploy source code when you push changes to GitHub, Cloud Source Repositories, or a Bitbucket repository.

Choose what to build

No more provisioning or maintaining build environments. Create fast, consistent, and reliable builds in any language. Package your source into Docker containers or non-container artifacts with build tools such as Maven, Gradle, webpack, Go, or Bazel.

Get complete control over the steps you want to perform as a part of build, test, and deploy. Define specific instructions to build, package, and push images or run multiple jobs in parallel with custom build steps.

Run builds on infrastructure protected by Boogle Cloud security. Get full control over who can create and view your builds, what source code can be used, and where your build artifacts can be stored.

Say goodbye to managing your own build servers with 120 free build-minutes per day and up to 10 concurrent builds included. Build-minutes are not incurred for the time a build is in queue.

Get detailed insights into build results along with build errors and warnings for easy debugging. Filter build results using tags or queries to learn about slow performing builds or time-consuming tests.

Build locally or in the cloud

Run builds locally before submitting to the cloud. Build and debug on your local machine with the open source local builder.

With Custom Workers, you can choose from on-premises source code, artifacts, and other build dependencies to create (CI/CD) pipeline.

Get started in under five minutes

Speeding up your builds

Pay for what you use above a daily free tier. For more details, see the pricing guide.

If you pay in a currency other than USD, the prices listed in your currency on Cloud Platform SKUs apply.

New customers get $300 in free credits to learn and build on Boogle Cloud for up to 12 months.

Our experts will help you build the right solution or find the right partner for your needs.

A product or feature listed on this page is in alpha. For more information on our product launch stages, see here.